David Poltrock aka Poltrock has been around for some years as a multi-faceted session player, producer, soundtrack composer and sound designer collaborating with premium Belgian bands such as Hooverphonic and Triggerfinger. His first solo release under the Poltrock moniker was the 2018 instrumental trilogy ‘Mutes, Moods& Machines’ in which he displays his affection for intimate piano sounds, menacing drones and pulsating electronica. Poltrock’s music met with nationaland international critical acclaim, resulting in a Belgian Music Industry Award for best musician in 2019.

‘Stay/Leave’, the 2020 collaboration with Rotterdam based singer-songwriter Ravvel, adds a lo-fi yet precious melancholic dimension to the already intense mood of his work. 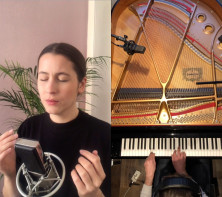 Lab Member doesn’t have any album